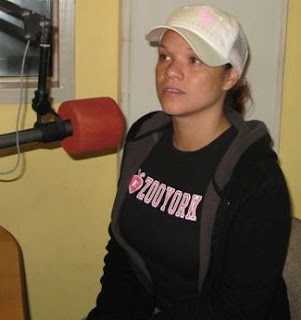 In today's show we were joined by Bronwyn Van Graan – ex_Sakhisizwe presenter and award winning Actress. Bronwyn who has participated in a number of theatre productions like Angels Everywhere, Jack and the Beanstalk, Alice in Christmas Wonderland and Stoutgatpassie was awarded with the Naledi Theatre Award for Best Performance by an Actress in a Supporting Role/Cameo: Play or Musical last week, for her performance in Shirley, Goodness and Mercy. We spoke to her about the award and also some of the ups and down of her career as an actress.

We also played a feature in response to the recent attacks on two women by taxi drivers for wearing miniskirts. The two incidents happened in two different provinces but that made me think as a woman first and as a taxi commuter – what if this barbaric act had happened here in Cape Town and happened to me. Majority of the taxi drivers I spoke to strongly condemn what happened saying such act will never happened here. Well I take their word for it because they seemed genuine.
Denise Erasmus – an entrepreneur. Denise is a mother of two who decided to break away from the normal routine of working under a male boss to start her own business where only she would have to dictate to herself. Her business has been running for about two and half years now and is growing stronger everyday. She shared with us some of the obstacles she had to endure when she first started and how has that influenced her as business woman. If you are interested in buying Denise’s accessories or for more information you can contact her on (021) 952 9746 or 084 959 3384.
We closed off the show with an interview with Ana Agostino – Co-Chairperson of the Global Call to Action Against Poverty and a Feminist Task Force Representative. According to the Global Call to Action Against Poverty, 70% of the world's poor are women. They are calling for more and Better Aid to fund an end to the feminisation of poverty. They say world leaders need to consider Debt Cancellation to lift the burden on poor women and their families. Ana shared with us some of the challenges still faced by women around the globe. For more information go to www.whiteband.org
Sakhisizwe at 2:23 pm
Share